This feature is available as part of vREST NG Pro/Enterprise version. Some features like Request Validation are introduced in vREST NG v2.3.0.

In this guide, we will see how you may derive your entire API testing using the API specification file written in Swagger/OpenAPI format.

In specification-driven testing, we majorly focus on our API specification file (Swagger/OpenAPI/... format) and keep it in sync with our latest API implementation.

This approach can be combined with data-driven testing methodology to get the best of both worlds.

You will get the following benefits when you implement the specification-driven API testing methodology for your API automation in vREST.

To define the API specification, simply visit the Configuration Tab >> Specifications section. And now click on the New Specification button and provide the following information:

Once you have defined the API specification file as shown in the previous step. Now let's try to generate a test from the specification. To create a test, simply visit the Test cases tab and click on the + icon in the toolbar to create your test.

A dialog window will appear. In the dialog window, simply select the Generate option to from Specification. And now the system asks for Test Suite Name, Spec Name, Operation.

Simply select the Spec Name from the list and then select the desired operation for which you would like to generate the test. Further system will ask you the following test case type:

Now click on the Confirm button to generate the test. Now, let's look at some of the information generated in the API test.

The following screenshots illustrate the generated API test through the Normal Test Case option. vREST automatically picks the request method, URL, request parameters (query, form, header), and request body to generate the API test case and it also adds the assertions to validate the test case. It also binds the test case using the Operation Id field in the details tab with the specific API specification operation as shown in the screenshot below. 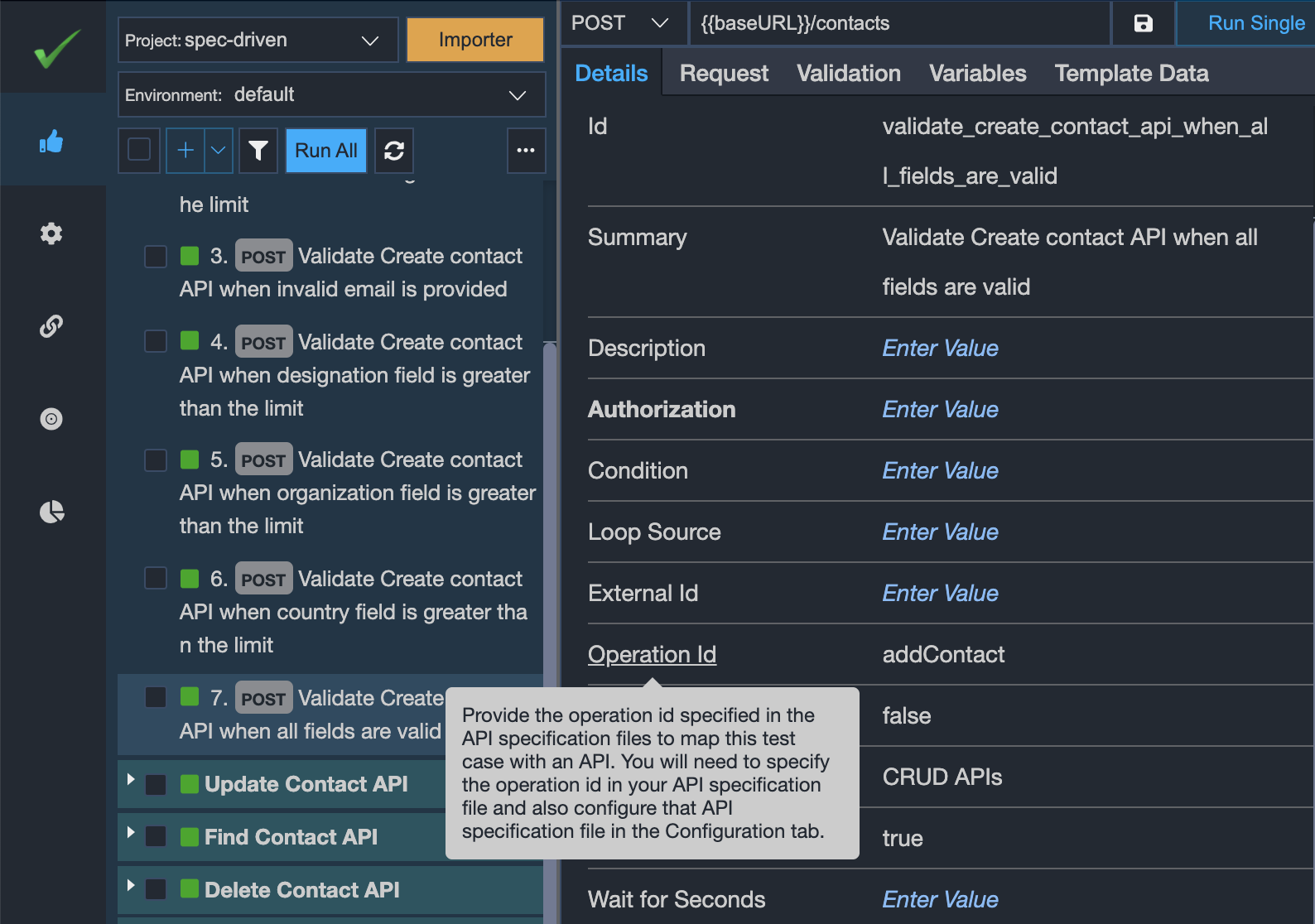 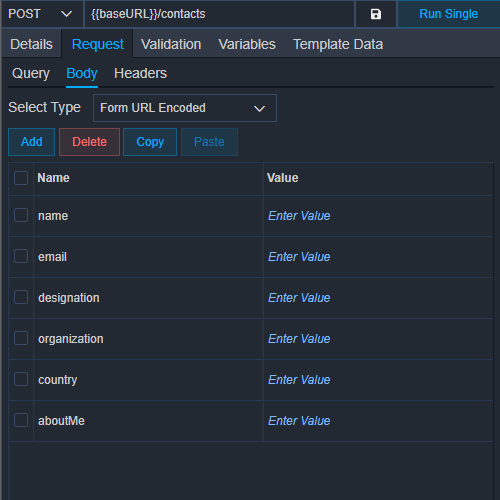 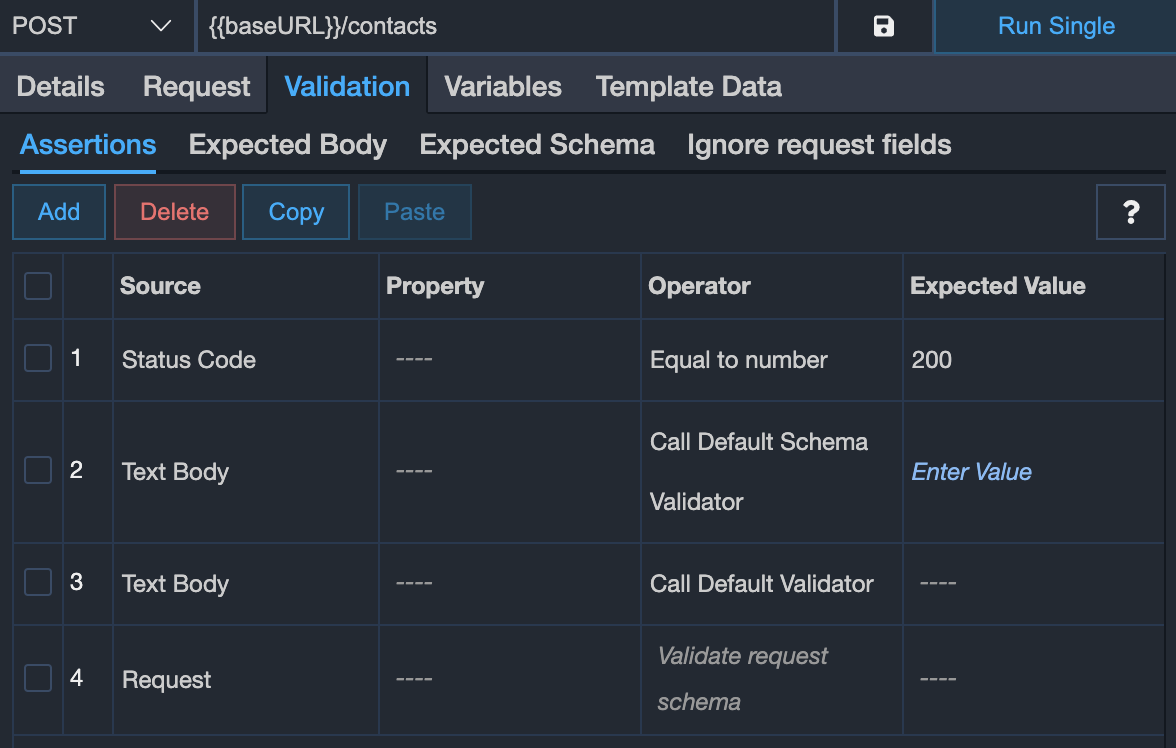 And the following screenshot illustrates the generated Expected Schema Tab content. Here {{$operation}} is a special variable that contains the value of the operation id linked in this test case. So, here we are validating the response structure of API response against the response structure defined in the API specification (responses list >> 200).

Now, let's see how you may validate your API response through the schema references defined in the API specification file. For that purpose, simply open the Validation >> Assertions tab. Now add a Text Body assertion that calls the Default Schema Validator. And in the Expected Value column, you may select the desired schema reference. You may even define this reference in the Expected Schema tab as we have seen in our previous step.

Please note that if you define the value in the Expected Value column of the Assertions tab, then the Expected Schema tab content will be ignored. 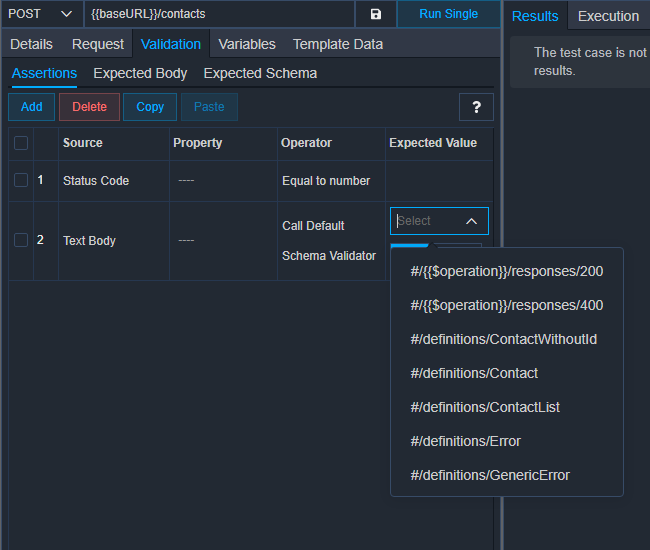 Now, let's see how you may validate your API request structure using our API specification file. If you have linked any test case using the Operation Id field with any of the API specification operations then you will be able to add an assertion with source Request in the Validation >> Assertions tab.

It will help you to quickly detect the API tests where the request structure goes out of sync with API specifications. In your API test, you are also allowed to ignore certain request fields during validation check, so that you may check erroneous conditions in your API tests.

In the Validation >> Ignore request fields tab of a test case, simply specify an array of request fields which you would like to ignore during request validation of a test case. You may also specify a variable (value must be an array or empty string) here as well. Variable such as "{{data.$.ignoreFields}}" will help you fetch the fields from a CSV/XLSX file (having ignoreFields column).

To ignore various kinds of request fields, follow the patterns below:

So, the example value, which you may set is as follows:

An example screenshot where we have ignored the email field in form parameters. So for this test case request, the structure of all the request fields will be checked except the email field.

Maintenance is the major issue in API testing. Many API test automation fails just due to this issue. In vREST, maintaining API tests is quite simple. For this, just update the API specification file in vREST and run the API tests again. vREST will automatically let you know which API tests need fixes and provide you with the exact reasons why a particular API test fails. And also you will be able to fix those issues quickly as well.

Normally an API test will need fixes due to the following conditions:

You may run the specification-driven API tests in the same way as you run any normal test case.

If the response schema assertion fails due to a change in API response structure, then you will get the following type of error in the Results tab. 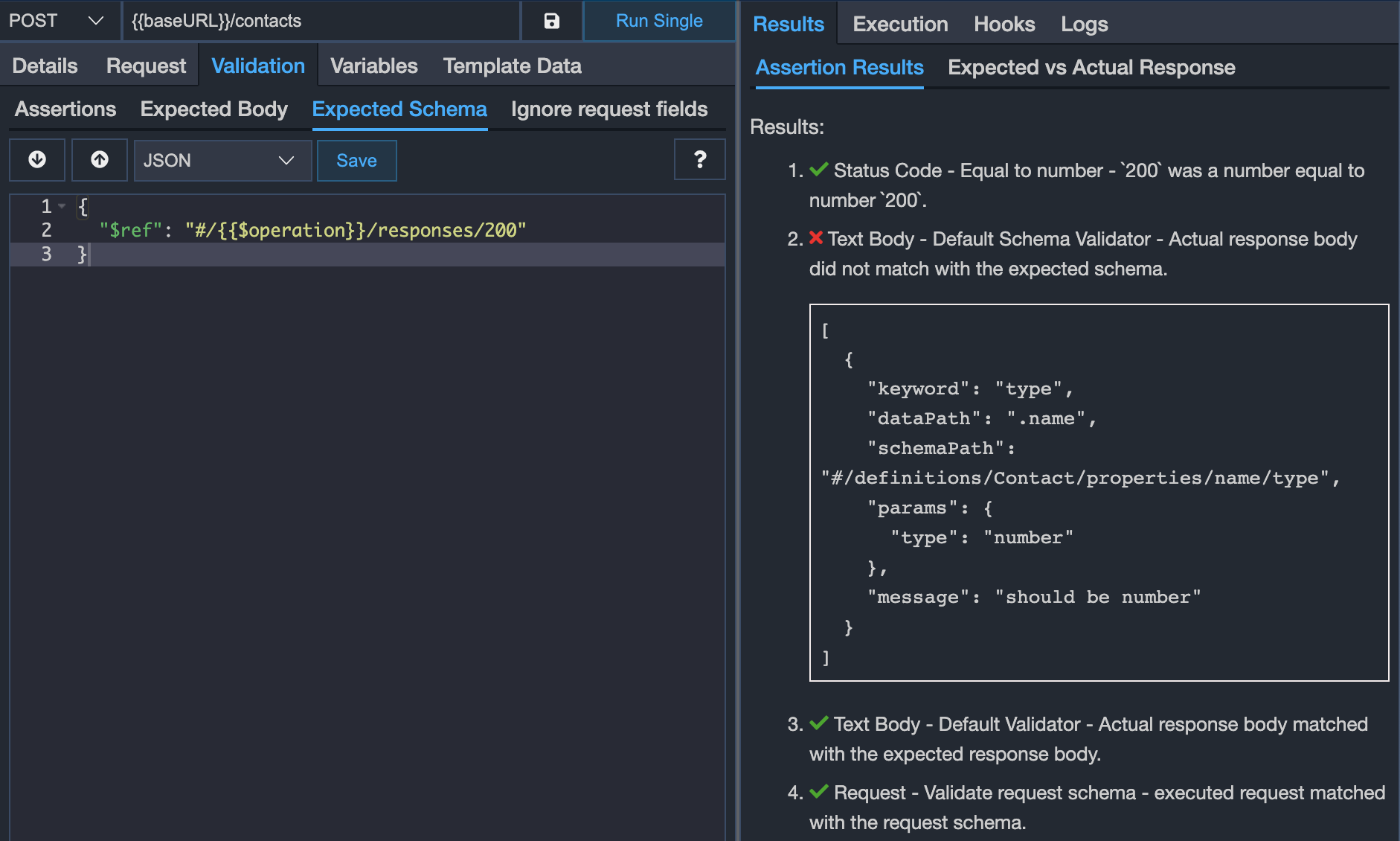 And if the request schema assertion fails due to a change in API request structure, then you will get the following type of error in the Results tab to quickly detect, why this particular API test fails. In case, if you have ignored certain request field(s) from validation then vREST will pass the assertion but show you ignored assertion errors. In the below screenshot, see the 4th assertion result to check request validation errors. 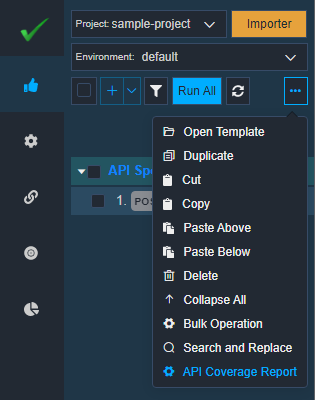 Similarly, we may add other tests as well. API Coverage report will provide the complete status of your API tests against each API operation in the API Specification file, as shown below: 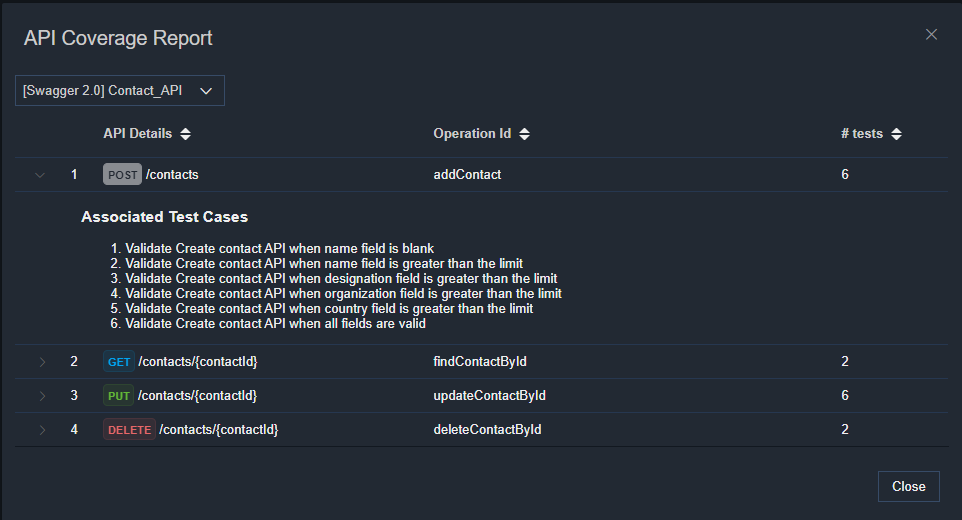 You may find the sample project containing test cases and test data files in this Github Repository.

The current limitations/known issues are as follows. We will fix them up in our subsequent releases soon.